skip to main | skip to sidebar

We had our last diagnostic ultrasound today and everything looked just fabulous!! Dr. D said that she "still looks like a girl" and I promptly informed him that if he's been wrong all this time, he needs to consider a career change! While we were looking at her hoohah, she actually peed and I could see it! It was the weirdest thing, but there is it on the DVD - so I got to see it again when B and I watched it tonight when I got home, so of course I pointed it out to him. He said, "they PEE in there?" Uh, yeah, of course they do - when their little kidneys start working, and they're swallowing amniotic fluid - they pee. "Oh, gross." What-eva! I thought it was cool as heck to SEE on the u/s!! If I could figure out how to dissect it out, I'd post that part -but B says I can't - I don't have his permission to post his daughter's girly parts on the internet!!

During the u/s, M and I were discussing various things, including baby size at birth - and Dr. D piped in telling us that she will be average sized "at best" and maybe even a little smaller - he estimates 7-8#!! Woo hoo!! Sounds GREAT to me! B has been insisting that the Doodle-bops "told" him that she was going to be between 7 and 8#! LOL Anyway, Dr D put her measurements into his fancy-schmancy computer and came up with 2# 8oz for her current weight estimation :) which is just average size for 28 weeks.

Anyway, he gave me a few more profile shots, which were just like the others, and then this one...waving to her daddy, who wasn't at the u/s!! 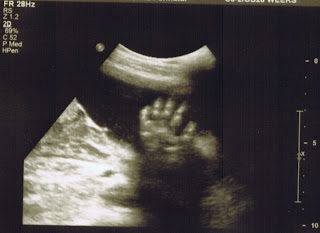 So, M says that she's ready for this to be over... she says that the Doodle-bops has a kick-boxing lesson at 3am every day and she's more than ready to hand her off to us so she can wake US up at night!! I'm ready for that, too!! Bring it on!

Stef
Beaufort / Morehead City, NC, United States
I am a mother, a veterinarian, an Army reservist, married to a retired Air Force Officer; B and I met in the most unlikely of places and, confident that we were meant to be together, we married 10 weeks later.

Our "journey" to have a baby was a not-so-usual roller-coaster ride, I suppose - "Life is what you make it" was started at the beginning of our surrogacy journey but also covers life in general, when it's interesting enough (in my opinion only! LOL) to warrant a blog entry.

The blog will now go in a new direction -- we plan to remodel and redecorate both my "new to me" home and my old clinic. I prefer to do most of the work myself - since I know best what I want. This will take some time, but hopefully there will be some interesting projects along the way!